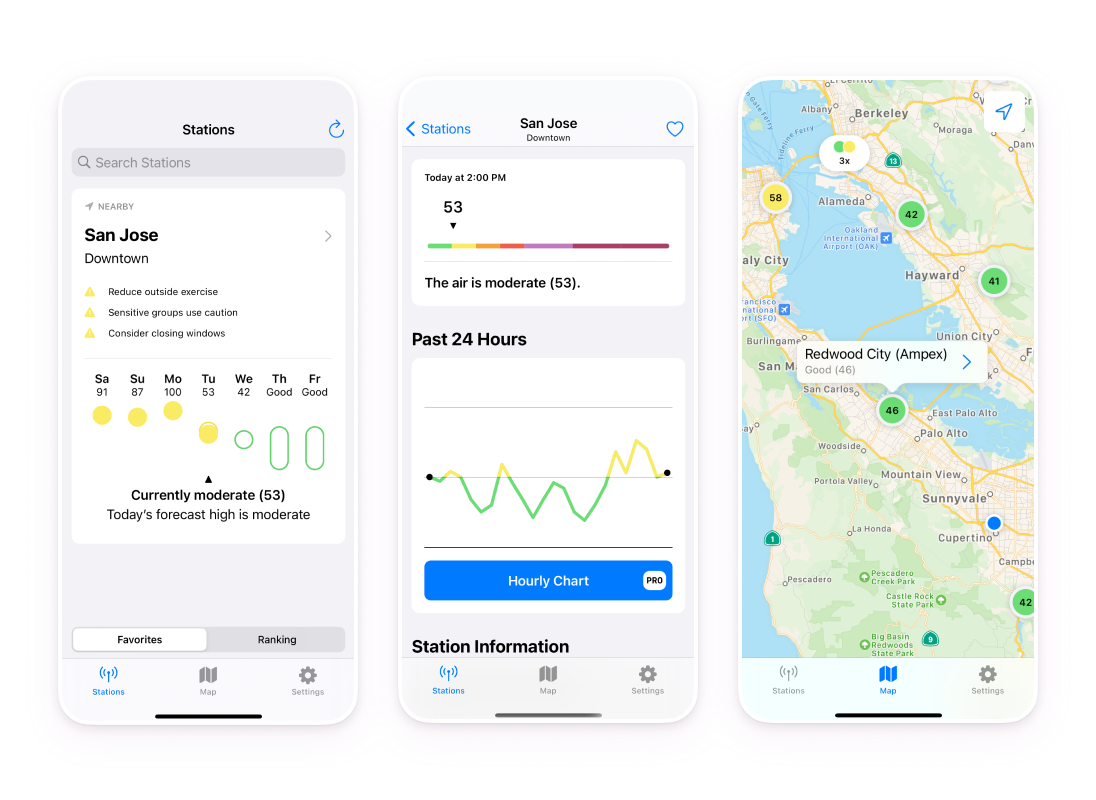 For the last two years, I’ve been working on a massive rewrite of Air Lookout. It finally launched last week.

Learning On The Go 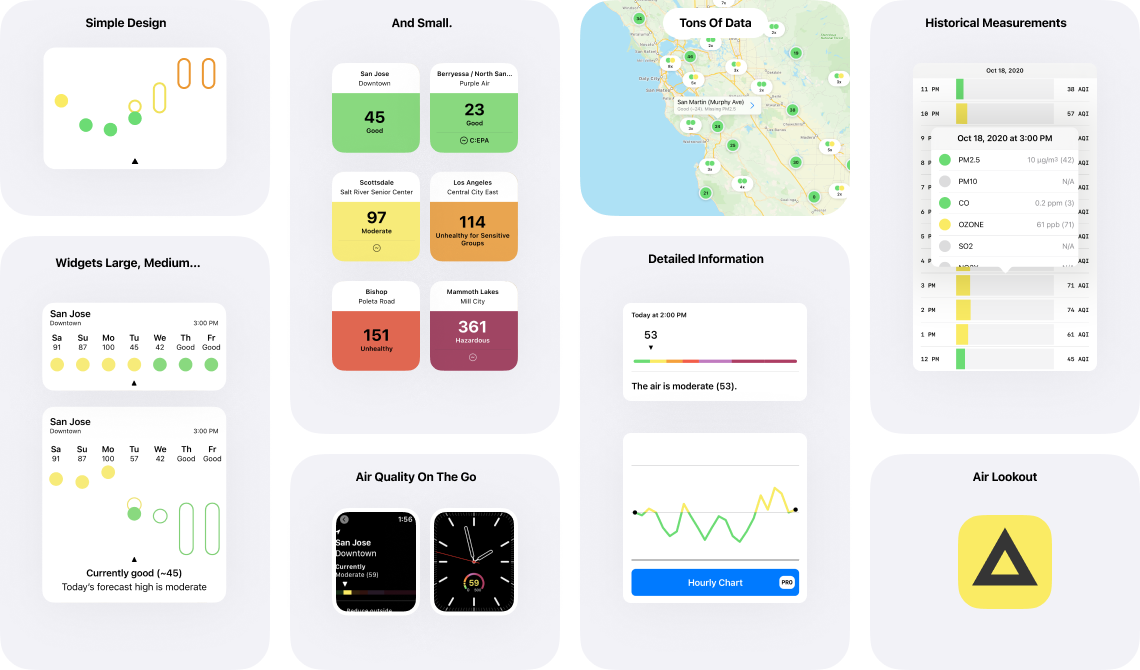 When I made Air Lookout 1, I didn’t know more than the basics of Swift and the iOS SDK. Everything was built with UIViews, UIButtons and UIImageViews. I even made a custom navigation controller and tab controller because I didn’t understand how to reliably use UINavigationController or UITabController.

By comparison, Air Lookout 2 covers an exhaustive amount of APIs in the iOS, iPadOS, watchOS (and soon macOS Catalyst) SDKs. Because of my previous inability to utilize the library of iOS APIs, Air Lookout never felt like a true iOS app. I grew to hate this. I decided that Air Lookout, in order to feel and work how I wanted for users, I’d have to learn to use a larger amount of the SDK provided by Apple.

It took a lot of learning and mistakes with many frustrating nights and weekends over more than two years, but Air Lookout 2 is finally here designed with functionality and features that I want (and more to come).

There’s a lot of new features in Air Lookout 2. Here’s a few of my favorites. 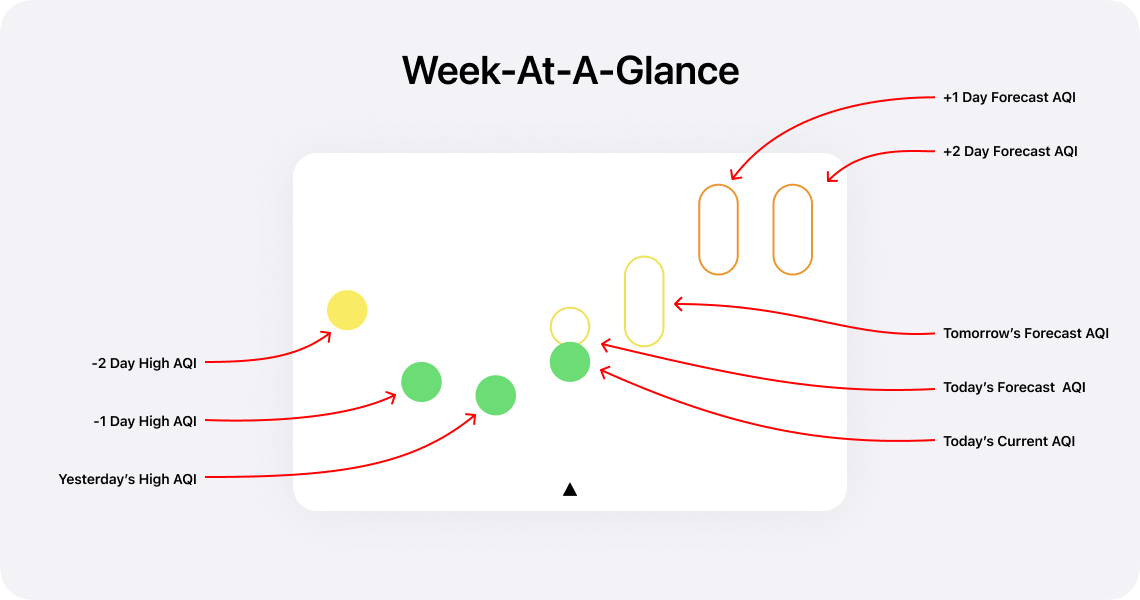 One of the hardest aspects regarding air quality is that the quantitative numbers—e.g. Moderate (55), Unhealthy For Sensitive Groups (115)—it’s hard to have a reaction based on experience. While the Air Quality Index categories help, seeing context of previous days will aid users in understanding the common questions: “Is today’s air quality better or worse than yesterday?” and “Is the air quality improving or worsening?” 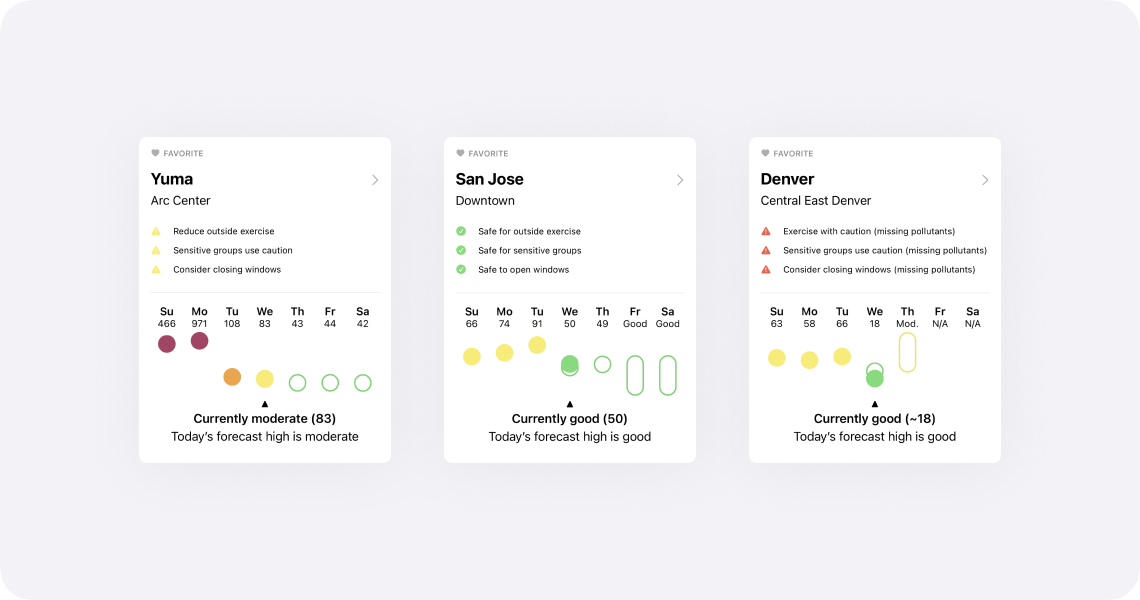 While there is a slight learning curve, once you’re used to reading week-at-a-glance, the higher information density is quick to parse.

Your Favorite Locations Without Location Sharing

Feedback that I would regularly receive with earlier versions of Air Lookout was that people didn’t want to share their location. I think that’s a fair complaint (it’s worth mentioning that my Privacy Policy should make it clear that I don't do anything creepy).

Now with Air Lookout 2.0, there’s a number of ways to accomplish this and never have to give Air Lookout location permissions.

The easiest way, that everyone has access to, is to set a home site. This can be accessed under Settings → Home Site.

If someone wishes to keep track of even more sites, one can unlock Air Lookout Pro and save as many sites as they want as a favorite. 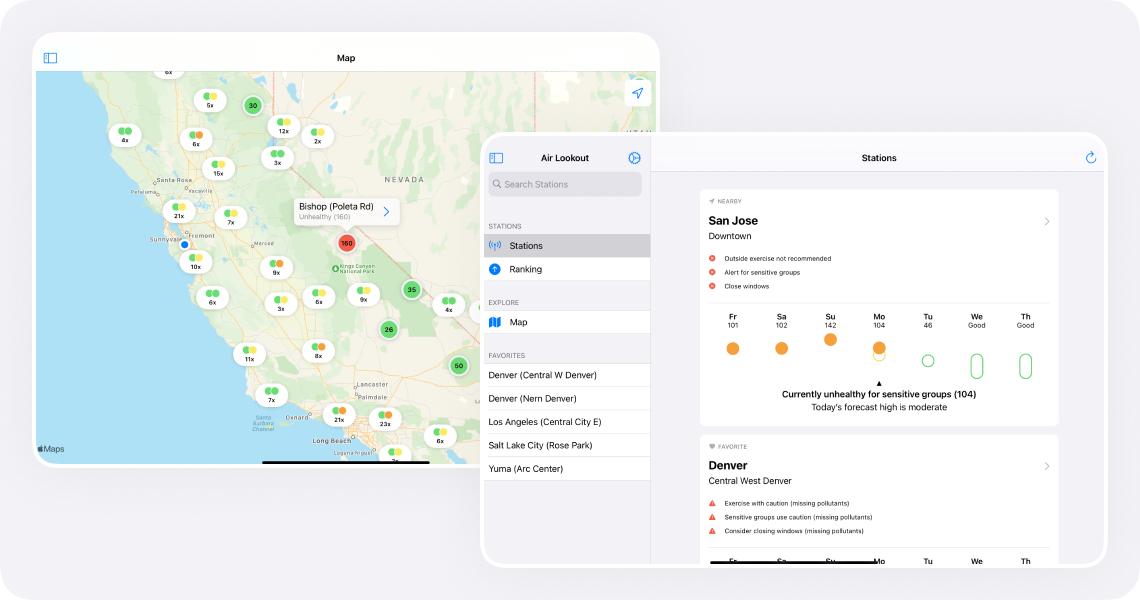 For the first time, Air Lookout is available on the iPad. I’m not sure how many people were clamoring for air quality apps on the iPad, but I love using Air Lookout on my iPad Pro.

Air Lookout Pro features, like the detailed hourly chart and map are awesome on the larger iPad screen. Additionally, there’s a sidebar for easy access to the same sections as the iOS tab bar but with shortcuts to view location favorites.

There’s more Air Lookout Pro features that I’m looking forward to that will be exceptional on the iPad. 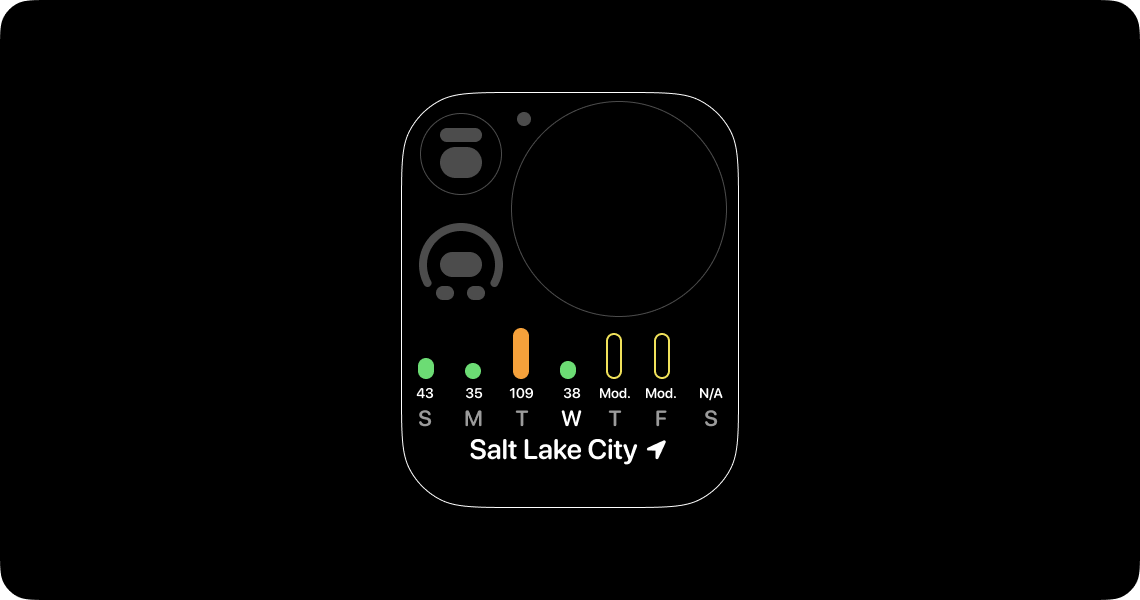 Complications for watchOS have always been a high priority feature for Air Lookout.

When I created week-at-a-glance I wanted to make sure it would work on devices as large as iPads to small graphic rectangular complications. The result for this complication is simplified: a bar chart instead of floating dots and category ranges. This decision was made to increase clarity on small device screens.

I had a lot of fun programming Shortcuts. It was hard to resist delaying Air Lookout to create additional Shortcuts (I strangely want to make a Shortcut that changes a smart light to an air quality index category color based on current conditions).

The Shortcuts that ship with Air Lookout should be enough to do a number of basic and useful tasks relating to getting AQI from nearby or favorite stations (App Settings → Shortcuts).

I made a basic shortcut to control my air filter that’s hooked up to a smart outlet that you can download. This can be further automated by using the fantastic Pushcut app.

The Most Important Lesson

After I shipped Air Lookout 1.0, which was originally a $0.99USD paid app, I had an unexpected discovery: my best sales were during the worst wildfires. This caused me to feel unbelievably gross. Profiting off other’s misfortune is the last thing I want Air Lookout to do. As a result, I made Air Lookout 1.x free. No tip jar. No in-app purchase. No profit. I would prefer to run Air Lookout at a loss than profit when people are at risk or in danger.

Not only is air quality an essential human right, but access to air quality data to make daily health and safety decisions should never be behind a pay wall.

Foundation For The Future

The biggest feature in Air Lookout 2.0 is, selfishly, for me2: there’s a new foundation for Air Lookout. To prepare for Air Lookout 2, I removed considerable tech debt that I had accumulated from early and naive decisions. The framework that powers Air Lookout is rewritten and ready for new technologies (such as SwiftUI and Combine) across a variety of devices from watchOS and iOS to macOS and HomePod.

I’m excited about all the upcoming and future features that this foundation will be able to support.

There were nearly 50 beta testers that provided essential feedback for Air Lookout 2.0. Without them, the binary and design that shipped would’ve not been nearly as good. More importantly, I need to thank Val for giving me the personal support I needed. When I started working on Air Lookout, Val and I were dating. Now, by the time Air Lookout 2 has shipped, we’ve been married for over 2 years. That’s pretty neat!

Do you want to support my work? Then download Air Lookout on the App Store and consider upgrading to Air Lookout Pro. You can learn more at airlookout.com.

1. If you open this link on an iOS device that your watch is paired with, it should be the exact Modular Compact watch face with Air Lookout complication.

2. However, the easier and more reliably I can update Air Lookout, the more the user will benefit.